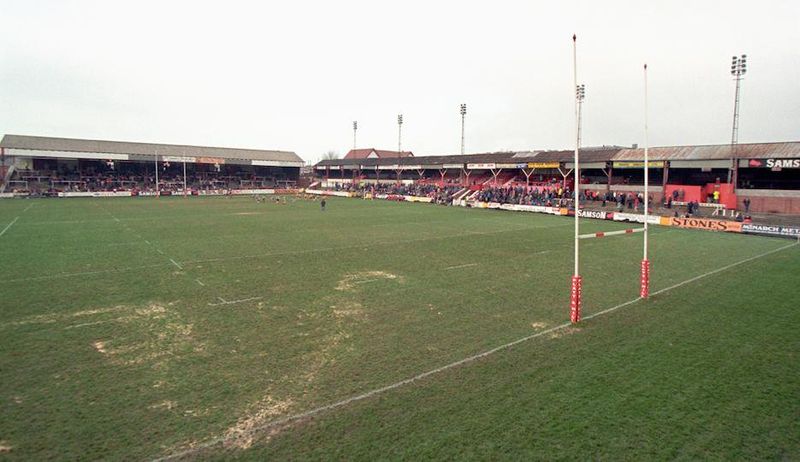 Longtime Roughyed fan , Mike Dunkerley, has sent the following poem to the Heritage Trust with memories of Watersheddings and the 1950s team.

Of Rugby men, a game called League, the best there’s ever been,
Roughyeds in the fifties were the greatest team on earth,
They battered opposition for all that they were worth,

Ken Jackson, Keith and Dufty and Charlie Winslade too,
They played up front and got stuck in like no one else could do,
And when it came to kicking goals then Bernard was the best,
The red and white, those well-known hoops, worn proudly on his chest,
There were many famous others who played up on the hill
But the Prince was Alan Davies, a man remembered still,

The Penny Rush, Committee Seats the Stand on Herbert Street,
All witnessed opposition who left the field well beat,
The pitch was mud, the crowds were big, some twenty thousand often,
Saw Turner, Vines and Little the opposition soften,

And not forgetting Kellett, Johnny Noon, Vince Nestor too,
Attacking backs with ball in hand who knew just what to do,
Cracknell, Ayres and Etty were members of the team
With Pitchford, Stirrup, Daley some others on the scene
They made the breaks and scored the tries like no one else could do.
The crowd all cheered their local team, and waved their rattles too,
There was no Sky or BT Sport, ‘twas a game not often seen,
Less Uncle Eddie from the Beeb just happened on the screen,

The players played for peanuts, a few quid heaven sent,
Trained twice a week, then had a pint, and back to work they went,
Sometimes there were bonuses, some extras in their boots,
But they still turned up in working clothes, not fancy sponsored suits

There was no sport on Sundays it was then against the law
So they played a game on Christmas Day and Boxing Day and more
And New Year’s Day had fixtures but the team did not complain
They just got changed, put on their boots and played a game again

No substitutes, no warming up, just loads of wintergreen
Thirteen Owdham players all proud to be in t’team
No Physios, no Agents, no special parking spot
A man with sponge and bucket was all the players got,

No floodlights in those far off days, no night time games to see
The supporters hut sold Oxo, or just a cup of tea.
Spectators came on buses with few cars on the road
From pubs and shops and mills and mines the Roughyeds to behold

Flat capped men made up the crowd with woodbines in their hand
And ladies came as well to see the best team in the land
Programmes cost a tanner to see the teams that day
To find the ref, that man in black, was “Sergeant Major Clay”

They changed in th’owd Pavilion, a building decades old.
A legacy of years gone by but what stories could be told
Of Oldham Brewery bitter and the much missed Oldham Chron
A Bob a Pint and 9 Card Don, the memories linger on
Pie and Peas, a tap room bar then sited further back
A practice pitch for Rugby teams inside a Greyhound Track
The one regret about this time that everyone will say
Was not to have their lifetime wish and walk down Wembley Way
The final tie to win the Cup, fulfil a long held dream
A victory ride down Union Street and knighthoods for the team

Oh happy days remembered when Owdham had a team,
The concrete walls all round the ground are only but a dream
There are houses now on hallowed turf, with clapped out stands long gone
They’ll talk for years about “that” team as memories linger on,

But as a sport mad boy from Royton, Red Scarf and crew-cut hair
I can say with happy memories …. “AT ‘SHEDDINGS I WAS THERE”