The Oldham Rugby League Heritage Trust is sad to report that, Oldham rugby league great Sid Little OBE has died at the age 87. 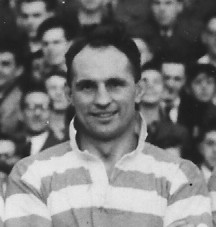 A native of Kirkbride, Cumberland, but brought up in nearby Burgh-by-Sands, the former RAF pilot joined Oldham during the 1951-52 season, having previously played rugby union for both Harlequins and the Cumberland county side.

On his arrival in Oldham, he and his wife Valerie, the daughter of Oldham’s stalwart loose forward and Welsh Rugby Union international Emlyn Watkins, lived in Werneth, before moving to Moorside, where they stayed until Little’s position as a company director required a move to the Midlands. A devastating, running second row forward, he formed a tremendous back row partnership with Charlie Winslade in the entertaining Oldham side of the 1950s.

His talents were soon recognised by the rugby league selectors, the pinnacle of his international career was scoring a try against the 1956 touring Australians in the third and final Test at Swinton. This not only equalled the biggest margin of victory for the British against the Kangaroos in an Ashes Test, 19-0, but both sealed the series 2-1 while at the same time regaining the Ashes. This was the commencement of 10 consecutive international appearances for Little, interestingly most of them at prop forward.

He represented Great Britain in the 1957 World Cup played in Australia and in which the British were runners-up to the home side. He also played in four promotional matches under the banner Great Britain XIII against the French. Three of these were played in South Africa and the other in New Zealand.

Including two promotional matches in Australia against Western Australia and Queensland, Little played in a massive 58 competitive matches during the 1957-58 season. Along with his Oldham team-mates Derek Turner, Frank Pitchford, Ken Jackson, and Alan Davies, Sid was then selected for the 1958 tour to Australia, but due to his wife Valerie expecting a family addition, declined the invitation. While at Watersheddings, Little, who also represented Cumberland at rugby league, played 249 times for Oldham scoring 49 tries.

The season 1957-58 saw Oldham top the league, winning 33 and drawing one of their 38 league games. Little, a member of the Oldham Rugby League Hall of Fame, also played for the Cumberland county rugby league side on eight occasions.

In December, 1982 he was awarded an OBE for his services to the Air Training Corps, Staffordshire, which he had served since 1970, holding the rank of Wing Commander.

Whenever asked to do so, Little would gladly point his car in the direction of Oldham. Whatever the event, he would lend his support, but understandably the occasions which he enjoyed the most were those which he could share with his colleagues from that glorious era of yesteryear.